Britt Samoson is a young talented Estonian fashion illustrator and a renowned fashion designer. Since graduating from the Estonian Academy of Arts in 2006 she has worked as the fashion editor for “Stiina” and “MOOD” magazines and has also contributed to the “Anne & Stiil” magazine.

Samoson has made illustrations for various magazines, including for the fashion section of “MOOD” and the horoscope section of “Anne & Stiil”, as well as for numerous specific orders. In 2013 she held her first illustrations exhibition “Tint ja taevas” (“Ink and Sky”) on the 21st floor of the Tallinn TV tower. In her drawings she loves the contrast of refined detail and gently flowing watercolours, her favourite tools being extra fine ink pens and watercolours.

Samoson has proven herself as a creative fashion designer with fashion collections “Flat Cut 3D” (2008), “Papercut” (2009), “Skeleton Cut” (2010), “Square Cut” (2011) and “Final Cut” (2012), which stand out for their dimensionality generated by cuts. She also draws inspiration from anatomy, geometry and Art Nouveau lines. In 2011 she was nominated the Best Young Estonian Fashion Designer and received the Small Golden Needle award. She has been among the nominees at the Baltic Fashion Award, where she won the audience prize.

Her style is far from easy to pinpoint: tasteful pastels and perfect composition conceal the gothic eroticism of human bodies prepared with a touch of surrealism. The eternity of the mineral structure of subject and body is in juxtaposition with the temporal living soul. And the man-made materials on ideally drawn models suggest the implacable inevitability of the ephemeral existence. 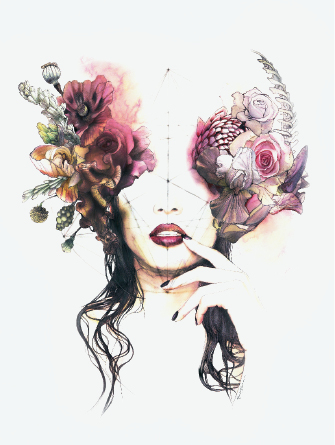