Liselotte Watkins is one of Sweden’s most prominent creatives. After attending the Art Institute of Dallas, she launched her career as an illustrator in New York. Her unique style gained immediate attention and she landed the prestigious assignment to illustrate Barney’s make-up ads every Sunday in The New York Times.

Her style is unmatchable, stunningly original.
At the same time her strength lies in never-ending restlessness. She never stays complacent, but ceaselessly refines and transforms her style.

Watkins’s style perfectly matches the feminine-girly identity of the modern-day fashion magazines, reflecting youth, beauty and broken melancholy. She also gives a retrospect of the seventies graphic design with her two-dimensional decorative style that tests both the viewer’s memory and emotional intelligence.

Some of her compositions strike as psychedelic, while others shine with clarity and even minimalism.

She has published two books: “Watkin’s Heroine” and “Watkin’s Box of Pin-ups”. 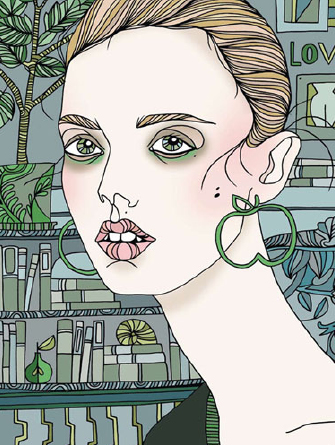